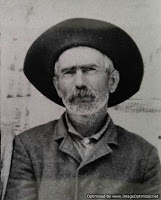 Brumley Family – William Brumley my great-great uncle, known to most people as Bill. He was born on March 11, 1847, in a small town called Richland in Gasconade County, Missouri. He was the first child born to Willis Brumley and Mary (Polly) Johns. His other siblings were; Nancy Ann, Amanda Elizabeth, and John Brumley. His half siblings were by Nancy J Vaughan-Loughery-Lewis and Willis; Alice Florence and Isaac Walter Brumley.

At the age of twenty-five, he married Mary E Williams on October 24, 1872, in Maries County, Missouri. In the Missouri Census of 1880, it has William living with R B Williams his mother-in-law and it lists Mary as dead. When my mother and I visited two newly found relatives in southern Missouri in the 1980’s they told us that his wife and two children were involved in a house fire that killed her and two children. We could never prove that this took place but we know she is buried in Kenner Cemetery in Hayden, Maries, Missouri. I don’t know if the children were buried with her or if they were in separate unmarked graves.

Bill picked up the pieces of his life after the loss of his first family and started to move forward once again. On July 6, 1881, in Maries County, Missouri he married his second wife, Mrs. Ellen Illinois Bell Lenox Blackwell. They had one daughter, America Layna, born December 3, 1882.

My mother and I heard many stories about Bill. One, in particular, was the time he had too much to drink and relied on his faithful horse to see to it he made it home all in one piece. He was known to be a character when he drank too much but that is the fun part of learning about your relatives doing family genealogy.

He and his wife remained in the Dry Creek area of Maries County until the time of his death. Bill died on May 7, 1917, of Chronic Intestinal Nephritis at the age of seventy years old.

He was buried in the Kenner Cemetery in Hayden, Missouri with his first wife Mary and his father Willis Brumley. My mother, Nancy Gertrude Brumley, myself and two other cousins walked this cemetery in mid-1980. We have at least eleven members of the family tree in this cemetery. Some of the tombstones are very old and you can hardly read what was engraved, others have nothing but white stones indicating a grave.

I have started up my Brumley Branches Genealogy blog again and have updated some of my favorite posts. Please feel free to share this post with family and friends. If you have questions or wish to add any new information please email me.

One Reply to “William Brumley”

This site uses Akismet to reduce spam. Learn how your comment data is processed.

Posts of the Past

Recipes showing step by step directions with pictures and a printable recipe card.

Finding My Ancestors
The National Institute for Genealogical Studies

Blogging the complicated lives of my ancestors